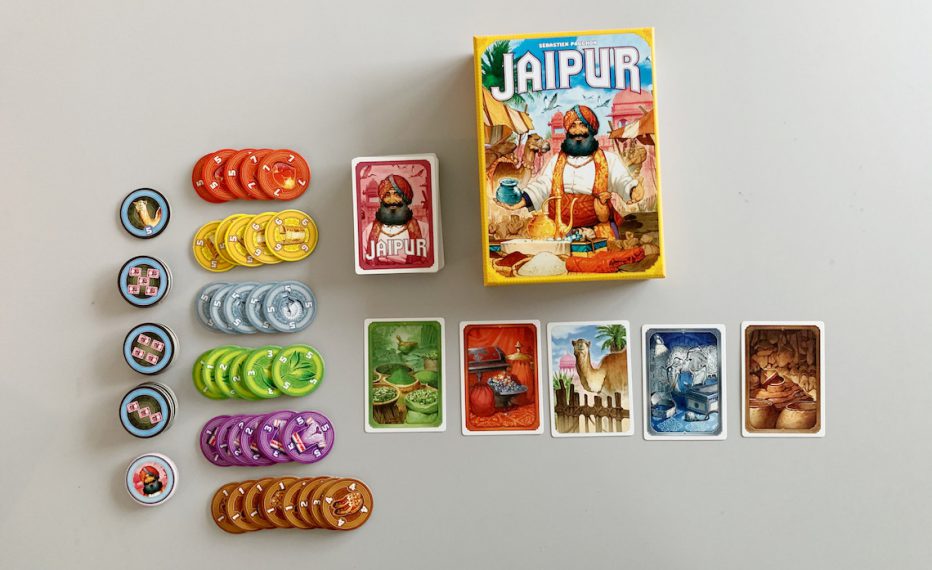 When other people bring the games or introduce us to something new, Steve and I are always happy to learn and play, but we’ve never been the initiator of games night or set out on our own to buy our own board games. This changed when our province announced a two-week period where you can’t socialize with anyone outside your household. Cooped up at home from bad weather, bored out of our minds indoors with nothing to do but watch TV, we wanted to try something new and give our eyes a break from screen time. We started by playing Scrabble, something we’ve never done with just the two of us. Three games later, we were ready to try something less classic and more creative.

Between my own research, asking my Instagram community, friends, and family, and chatting with my local game shop, here are five 2 Player Board Games for Adults to consider, and what makes them fun. This is a marketplace card game where you are acquiring, trading, or selling goods from a market in India to earn Rupees. When sold, different commodities (diamond, gold, silver, spice, silk, leather) are worth different amounts, with bonus points if you are able to amass larger quantities of the same item. Instructions were clear and easy to follow from the first game onwards. The game is quick paced — meaning there’s not too much time spent thinking for each turn — but there’s still a good balance of luck and simple strategy. Who would have thought there would be a board game about foraging for mushrooms in the forest?! Two decks of cards are used to play this game, a “Day Deck” with ten different types of mushrooms along with symbols and accessories like baskets, cider, butter, pans, and moons, and a smaller “Night Deck” of mushrooms that can only be foraged by moonlight. Each mushroom card has two values, one for selling and one for cooking. Beware of poisonous mushrooms. The game mechanics could be compared to Jaipur in the sense that you are collecting and selling items, and uses a combination of luck and strategy, but there seems to be more variables in Morels. This one came recommended to me from my local game store, both for its simplicity and for its humor. Taking place during the French Revolution, players are rival guillotine operators, beheading famous nobels from history and trying to collect the most points based on the victim’s notoriety. Cards of famous people are lined up in a row before the guillotine, and players can either behead the first person in line and collect their points, or play action cards to shuffle the order of the line.  Played over three rounds, the player with the most points at the end of the game wins. Azul came highly recommended from my online community. Players collect sets of similarly colored Portugese-inpired tiles which they place on their board, acquiring tiles to create patterns for points. Players score points based on how they’ve placed their tiles to decorate the “palace”. Extra points are scored for specific patterns and completing sets, while unused supplies detract from the player’s score. The player with the most points at the end of the game wins. Codenames is a word association game that inspires creativity. 25 word cards are set up as a 5 x 5 grid on the table, each card with a single word on it. The words are very random and change every game. Here are some example: Igloo, Pew, Lemonade, Rabbit, Tuxedo, Shampoo, Skirt, Trenchcoat, etc. Players have to link together different words on the table, by giving a single word clue along with a number, that ties multiple cards together.  For example, the clue “Liquid 2” would tie together the “2” words of Lemonade and Shampoo while “Clothing 3” could tie together the “3” words of Tuxedo, Skirt, and Trenchcoat.

We love the creativity that Codenames inspires, we’ve played it often as a group game, and we are happy to see that there’s a version called Codenames Duet — which is more collaborative than competitive — that’s adapted for two people.