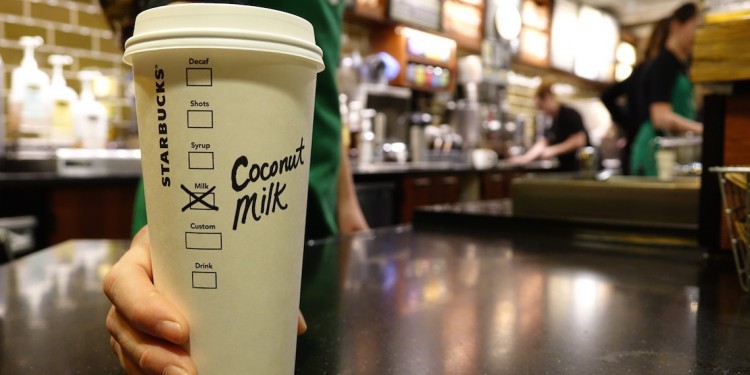 You don’t have to be lactose-intolerant, dairy-free, plant-based or vegan to enjoy coconut milk as a dairy-free alternative, the taste of coconut milk is delicious too!  The texture is creamy and the taste is sweet and nutty, and would be a great addition to your matcha green tea latte, Frappuccino or your favourite Starbucks coffee beverage.  Similar to buying single origin coffees, single origin coconut milk imparts a flavor profile unique to the Sumatra region resulting in great tasting coconut milk.

Inspired by the votes, tweets and barista requests for coconut milk at Starbucks locations, it’s clear that Canadian customers are thirsty for dairy alternatives.  In fact, Coconut Milk is the second-most popular request of all time on MyStarbucksIdea.com, a website launched in 2008 as a way for Starbucks to engage with customers around the world and learn from them.

First launched in U.S. locations earlier this year in February 2015, Starbucks Single Origin Sumatra Coconut Milk is certified vegan and made from single-origin coconuts from the tropical Indonesian island of Sumatra. With this addition, customers have numerous options including soy milk, 2%, non-fat, whole milk, half-and-half, and in some areas lactose-free milk, adding to the more than 170,000 ways to customize Starbucks beverages in stores.