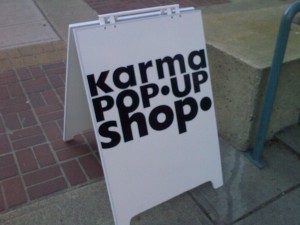 If you have lately walked by the Yaletown-Roundhouse Canada Line station, you may have noticed the KARMA pop-up store on Davie Street. KARMA is a local active wear company made in Vancouver.” We design clothing with subtle logos, clean lines and hidden features. By avoiding over the top details, KARMA clothing remains classic.” From now until April 24th, the KARMA pop-up shop featuring stockroom sale items will be located at 289 Davie Street in Yaletown. Hours are Monday to Friday: 10am – 7pm, Saturday and Sunday: 10am – 6pm. In addition to already reduced prices, they will be having daily promotions. For more information, check out the Karma Pop-up Shop Facebook Group.

If you are fortunate enough to make it through the LiveCity Yaletown‘s lineups, check out Samsung’s OR@S Pavilion, where Olympic fans can become a snowboard designer for a day. Visitors are invited to create their own unique snowboard design using the graphic assets of Samsung’s CORBY phone. Visitors can have fun and design their own exclusive look of the 2010 Winter Games and then email their snowboard creation which becomes a souvenir of their experience at the Games. Visitors are also entered daily into a contest to win a free snowboard, Samsung is giving away a snowboard for each day of the Games.
. 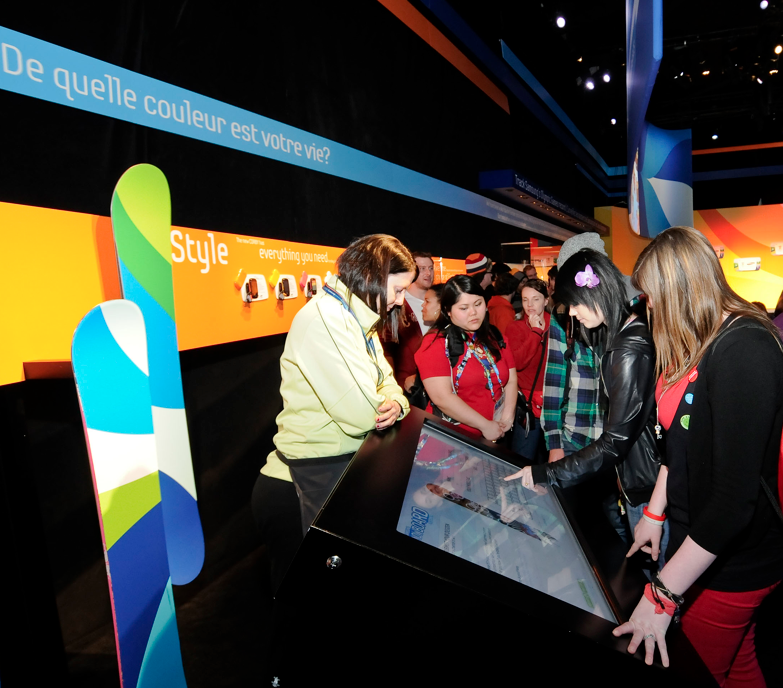 George Ultra Lounge is the Godfather of Vancouver’s cocktail culture. Modeled in the London style, George pioneered the cocktail kitchen concept in Canada when it opened in 2005. Today, with award-winning Shaun Layton behind the bar, George continues to pour proper classic and market-fresh cocktails, complimented by a dinner and late night menu through 2 a.m

George Ultra Lounge (1137 Hamilton Street) is taking a page from the Vancouver 2010 Olympics and holding their own “Mixlympics”, a competition featuring ten bartenders (6 international, 4 local) competing head-to-head in a black box style event. Sponsored by Martin Miller’s Gin & Arc’teryx, these masters of mixology will be vying for the top prize – $500 cash provided by Martin Miller’s Gin, but there will be medals too. Gold, silver and bronze, just like the athletes competing in Vancouver and Whistler. The event is free and open to the public. Doors open at 12:00 pm but it might be best to get in line a little bit earlier.
.
The international contestants are:

Representing Canada will be:

I had the opportunity to check out Bombay Brow Bar (1056 Mainland Street), a new concept boutique specializing in shaping your brows but with Yaletown service style. Newly opened by sisters Ravy and Amy Minhas, Bombay Brow Bar brings in a Bollywood experience, with a Yaletown twist! Ravy is a business graduate from Thomson Rivers University, while younger sister Amy is a freshly trained esthetician from Vancouver Community College.

.
Noir Lash Lounge, Vancouver’s first and only exclusive boutique lash extension service, opened its first location in Yaletown in March 2009. Within six months, Noir has appeared in numerous media including The Globe and Mail and the 2009 Juno Awards. “It’s no wonder the city’s turned from lash virgins to full-blown lash addicts!” And now, congratulations once again, as Noir is opening its second location in South Granville – conveniently located next door to Pure Nail Bar and around the corner from Blo Blow Dry Bar. What a great addition to the neighbourhood!
.
Doors open February 11th, 2010. Call 604-738-LASH (5274) to book your appointment.