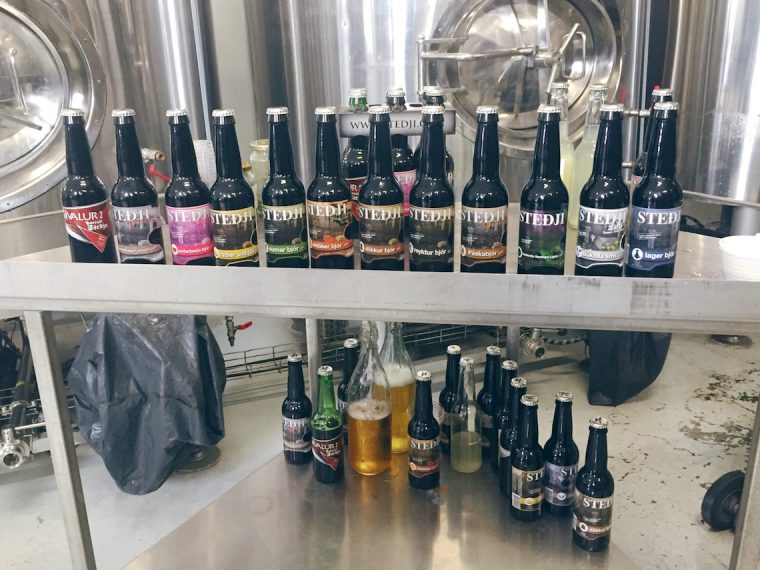 On our last full day in Iceland, we spent some time exploring the Borgarnes region in West Iceland, about 90 minutes North of Reykjavik.

Even though we are so far away from home in Iceland, my thirst to support local (and my boyfriend’s thirst for beer!) does not change.  One of the stops we made was at Brugghús Steðji, an Icelandic craft beer brewery, which offers tastings for 1,500 ISK (approximately $15 CAD), and 6-packs of beer for 2,000ISK (approximately $20 CAD).

Due to its many glacial springs, water in Iceland is very clean and pure.  Stedji has its own natural source of spring water, and brews its beer with this.

Here are a couple of the unique flavours which stood out:

Current tasting hours are from 1pm to 5pm daily, except Sunday. We showed up without booking anything in advance.  The brewery accepts credit card, however, they preferred for us to use PayPal.  We didn’t have access to wifi at the brewery, so they let us walk out with a 6-pack of beer, with an IOU (which, for the record, we promptly paid the next day). My boyfriend and I both remarked afterwards that it was refreshing to experience a culture which is so trusting.

From Reykjavik, driving clockwise on the Ring Road, head north on Route 1 towards Borgarnes for about 70km. Before crossing the bridge to Borgarnes, turn right onto Route 50 towards Reykholti. Follow Route 50 for about 20kms until you pass a sign for Route 515, then keep an eye open for a big beer bottle on the right, marking the entrance to the Stedji Brewery. It’ll seem like you’re driving for ages (Did I miss it? Did I miss it?!), but the beer bottle is impossible to miss.  The Brewery is just up the short driveway towards the farm house.