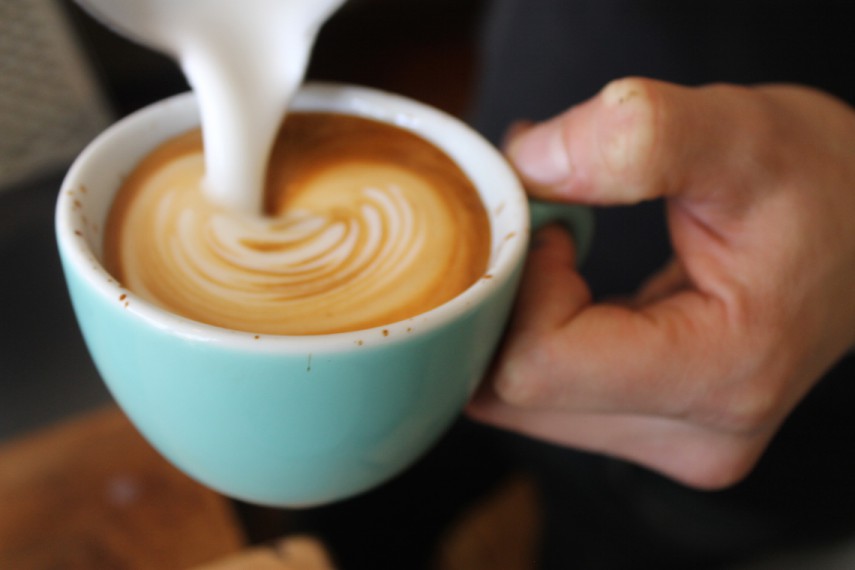 Having had his first taste of coffee as a young boy when his mother use to put a spoonful of espresso in his milk, you can say Sammy Piccolo has always had coffee running though his veins. From his early days with Caffè Artigiano, to roasting coffee at 49th Parallel Coffee Roasters, to now owning one of Vancouver’s best cafes, Sammy Piccolo and his brothers have been a driving force in Vancouver’s coffee scene.

Earlier this month, MMV had the opportunity to sit down with Sammy and delve a bit deeper into the story behind Prado Café.

MMV: You come from a background in coffee as you began your career opening Caffè Artigiano with your brothers. How did you get the idea to open Prado Café?

Sammy: Fifteen years ago when we opened Caffè Artigiano, I was only 21 years old. I didn’t know a lot about the coffee industry when we began, but that’s definitely where I learned most of what I know. Once we sold Caffè Artigiano, I knew I wanted to open my own business, but wasn’t entirely sure where to begin, so I became a small partner in my brother’s business 49th Parallel Coffee Roasters. One of their first clients was Prado Café, and I knew as soon as I saw the original location on Commercial and 4th, I knew I wanted to buy it. I made the owner an offer and luckily I became the proud new owner of Prado Café.

MMV: What originally grabbed your attention in Prado Café?

Sammy: When I first saw Prado Café, I knew I wanted to make an offer. Overall, I loved the location and the space. It was very minimalistic, modern and bright and had extremely high ceilings. While I did end up redesigning parts of the original shop, I used the original design as inspiration. The same goes for our Gastown and now Fraser locations as well. I designed each cafe to fit the neighbourhood it’s a part of, but kept the overarching bright, modern and minimalistic theme evident in each. I designed each and every part of my cafes, so I like to think of them as a representation of myself and the brand.

MMV: Now you’re opening a new location on Fraser Street. What can your customers expect from this cafe that will be different from your other locations?

Sammy: I think the main thing that will set this location apart from the others is the food offerings. With this new location, we’ll be expanding our offerings and making home made bread and other healthy options. In addition to our already delicious items, we’ll include dishes such as buckwheat waffles and baked beans on toast. I’m also currently studying to become a holistic nutritionist, so I always try to include healthy options and buy organic when I can. Because of this, I prefer to create seasonal menus that feature what’s fresh each season, such as adding a pumpkin pie topping option for our classic waffle.

“My menus are always progressing when it comes to food. I try to cater to each neighbourhood and ensure each of my cafes have different and unique menu items.” – Sammy Piccolo, owner Prado Café

MMV: You probably get asked this a lot, but what is your favourite coffee beverage?

Sammy: Honestly, I prefer a simple small batch brew, which is another term for drip coffee. In my eyes, it’s the most consistent and really allows you to taste the farm where the bean is from, its region and its terroir. You also get to experience the way different varieties of beans taste and get to know the coffee just that much better.

As I finished up my chat with Sammy, he left me with one last tip. When drinking a latte or any other coffee beverage, forget about the beautiful latte art (after you’ve taken a photo of course) and stir your beverage before drinking. All the bitterness from the coffee lingers on top, so stirring will make your cup of joe more balanced and delicious.