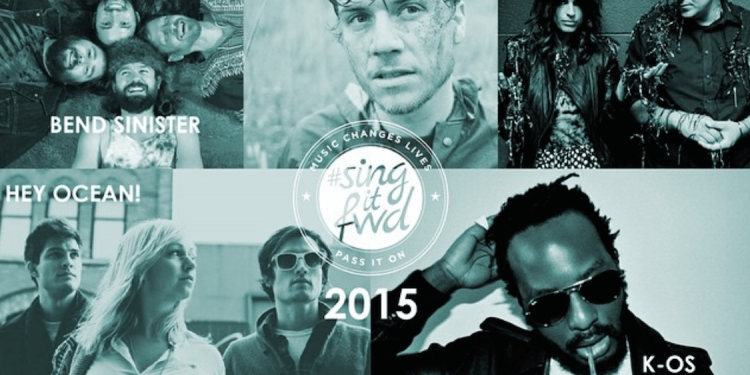 Presented by 102.7 The Peak and The Vogue Theatre, #SingItFwd returns to Vancouver on Thursday January 8th, 2015. Expecting its fourth consecutive sell out crowd, the annual charity event will once again be held at The Vogue Theatre while continuing its mission to raise awareness, community connection, and much needed funds for Vancouver’s Saint James Music Academy. Known for its unique format showcasing an acoustic side to acts renowned in the music industry, this year promises another powerhouse lineup, which includes K-os, Hey Ocean!, July Talk, Harpoonist & The Axe Murderer, Bear Mountain, Dear Rouge, Jordan Klassen and Bend Sinister.

Over the past three years #SingItFwd has raised over $100,000 with 100% of the proceeds going directly to the SJMA (Saint James Music Academy) which offers high quality music instruction in Strings, Woodwinds, Brass, Percussion, Choir and Orchestra to children living on Vancouver’s Downtown Eastside at no cost to students’ families. They provide “social change through music” five days a week to just under 200 children, including daily meals and ongoing social support including music therapy. This year #SingItFwd aims to raise an additional $40,000 to not only help fund and support the programs at the SJMA, but also to help the school work towards its goal of securing their own facility for the 2016 school year.

Co-founded in 2011 by David Vertesi (Hey Ocean!) and Ambrosia Humphrey (VP Talent for HootSuite Media Inc.), #SingItFwd was born from a shared desire to take action and build a stronger local musical environment by connecting with, and mobilizing, their own communities.

“Our goal is to foster a strong local network of collaboration, not competition. Working together as a community to grow music and the arts in Vancouver is not just about raising funds for kids today but more so it’s about aligning with, and shining a spotlight on, initiatives that are already working to build social change through music – like the Saint James Music Academy.” – David Vertesi

Recognized as one of the best and most anticipated shows of the year, #Singitfwd has featured a long list of celebrated Canadian artists, including favourites such as Hannah Georgas, Hey Ocean!, Shad, Dan Mangan, and Ryan Guldemond of Mother Mother.