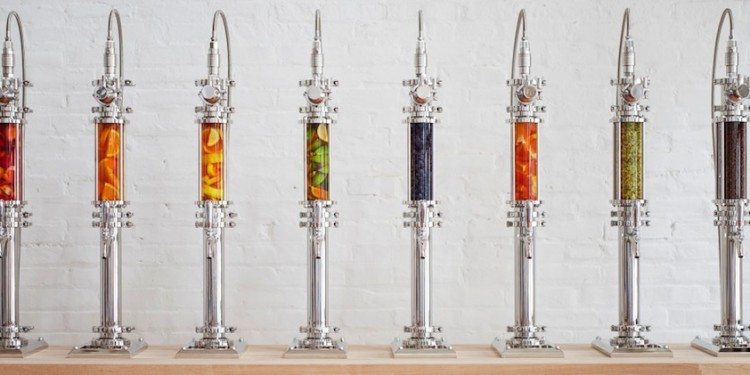 Modern Mix Vancouver recently visited The District Brasserie in Londsdale Quay to sample the beer from their new beer fusion tower – the first of its kind on the North Shore.

What exactly is a flavour infuser tower?  It’s a device which was developed to pour ice-cold beer, uniquely infused with an endless combination of flavour possibilities. Think fruits, veggies, spices and anything else the brains behind the bar can come up with.

I was warmly welcomed by owner and Red Seal chef, Paul MonKau, just as his team was infusing another flavour combination- coffee beans, mint, and cocoa into Alexander Keith’s IPA.

I originally had my doubts about the effectiveness of the infuser but after tasting the beer I was very impressed by how distinctly I could taste each individual ingredient. Since the infuser tower had been installed, the District Brasserie has been regularly introducing seasonal inspired flavours for its customers, including pumpkin spice and apple pie.

The District Brasserie prides itself of having an exceptional list of imported from Belgium which with a distinctive Dutch-Belgian inspired menu. In fact, the District used to have some of the rare and consistently ranked top 5 beers in the world; for example, the Westvleteren Belgian Trappist Beer.  It is rumoured that Paul actually has a couple last bottles locked up for special occasions.

Overall, the warm and cozy environment of The District Brasserie would make a perfect spot for a holiday get together with friends and family. We’ll see you there for a beer or two!