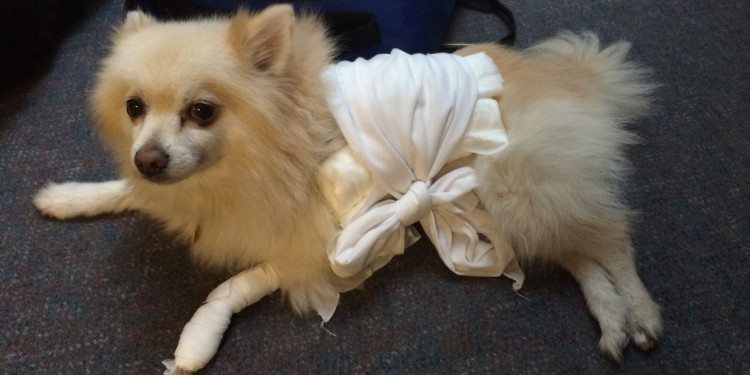 Beware: cute photos of pomeranian playing pretend-injured and wrapped up in bandages up ahead.

Knowing what a big role my pup Teddy Bear plays in my life, the British Columbia branch of St. John Ambulance invited Teddy and I in for a crash course on pet first aid.  Typically, one of these courses will run all-day for seven hours in a group setting, but we had a condensed, one-on-one version instead.

First aid is not the most exciting topic in the world, but, like insurance, it’s a necessity for when something goes wrong. 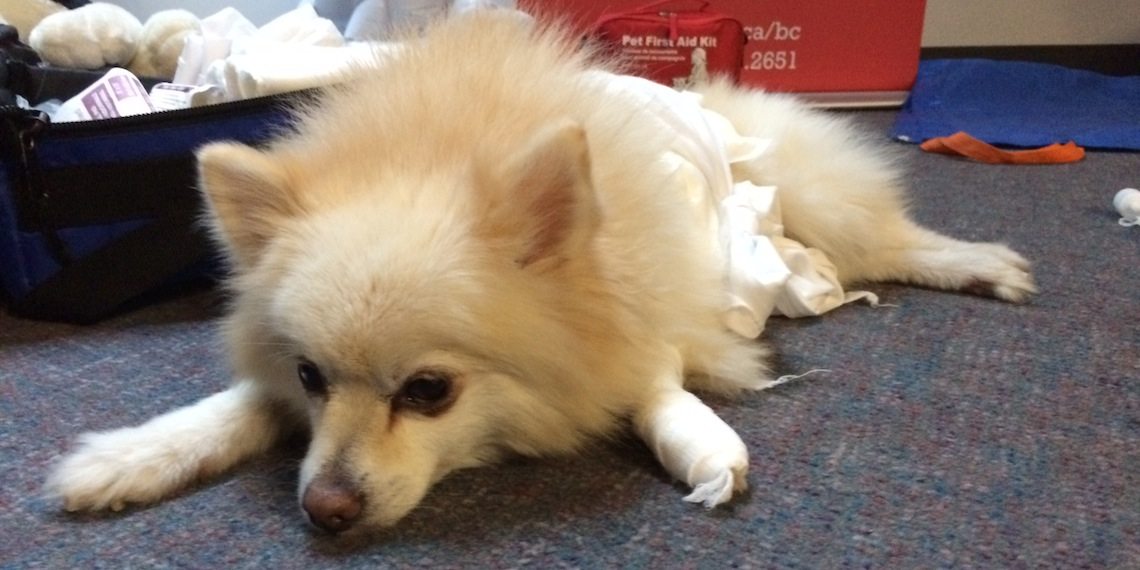 A sad and “injured” Teddy Bear. 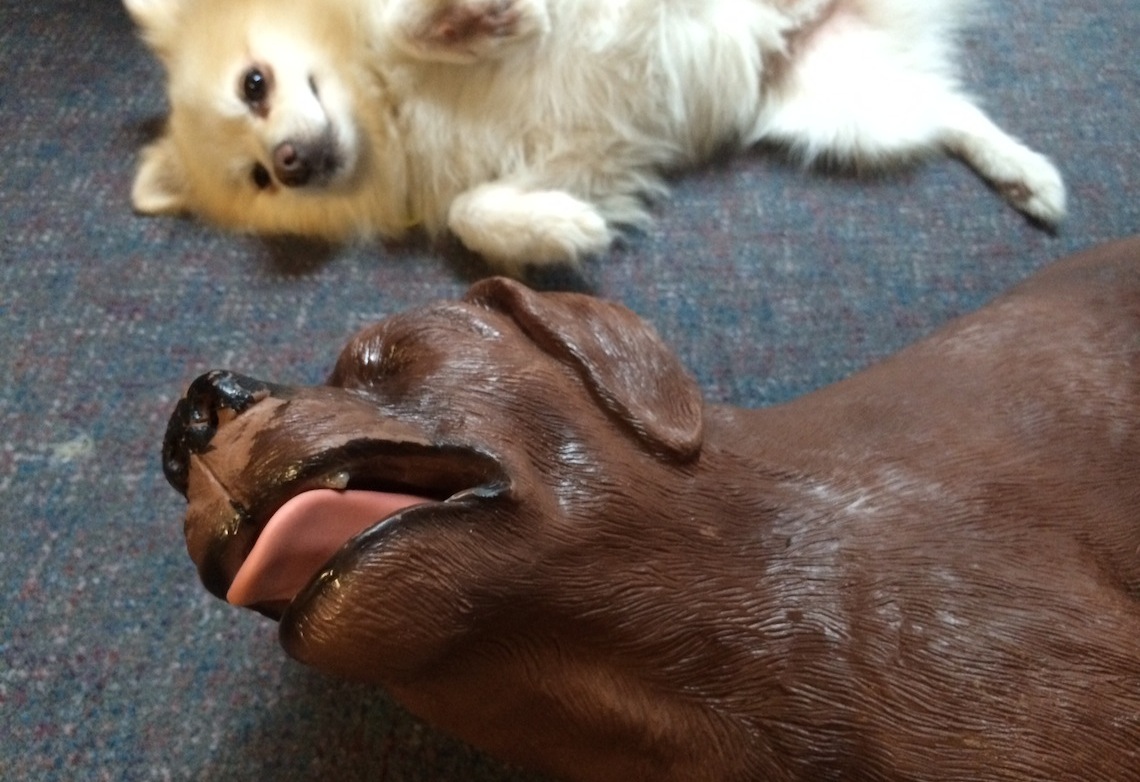 Understandably, real dogs are not usually allowed at the first-aid course, so a fake plastic demonstration dog is used instead.

Each course begins with the instructor asking the attendees what their hopes and expectations are for the course, so the material can be tailored towards the audience and be as relevant as possible.  Knowing that Teddy was a small dog who is city based and doesn’t go out into the wilderness much (except for an occasional hike up Quarry Rock!), we focused mainly on practical scenarios which could happen to any Vancouver city dog: choking on a treat, getting nipped on the ear at the dog park or how to handle a glass-puncture injury.

How to bandage a dog with a nipped ear: lay the injured ear flat on the head, sandwich with gauze, and bandage around the head.

We were then walked through hands-on demonstrations about what to do in these scenarios.  My wonderful Teddy Bear was being a great sport, and let us do “body checks” on him, wrap his head, leg and body up in bandages, as well as transport his body on a tarp.

We also learned how to handle an injured dog differently from an injured human. For example, when in pain, even a dog with a normally great temperament may resort to snapping and aggression, due to the circumstances and not knowing you are trying to help.  The trick is to be able to modify your body language so the injured animal doesn’t view you as a threat. 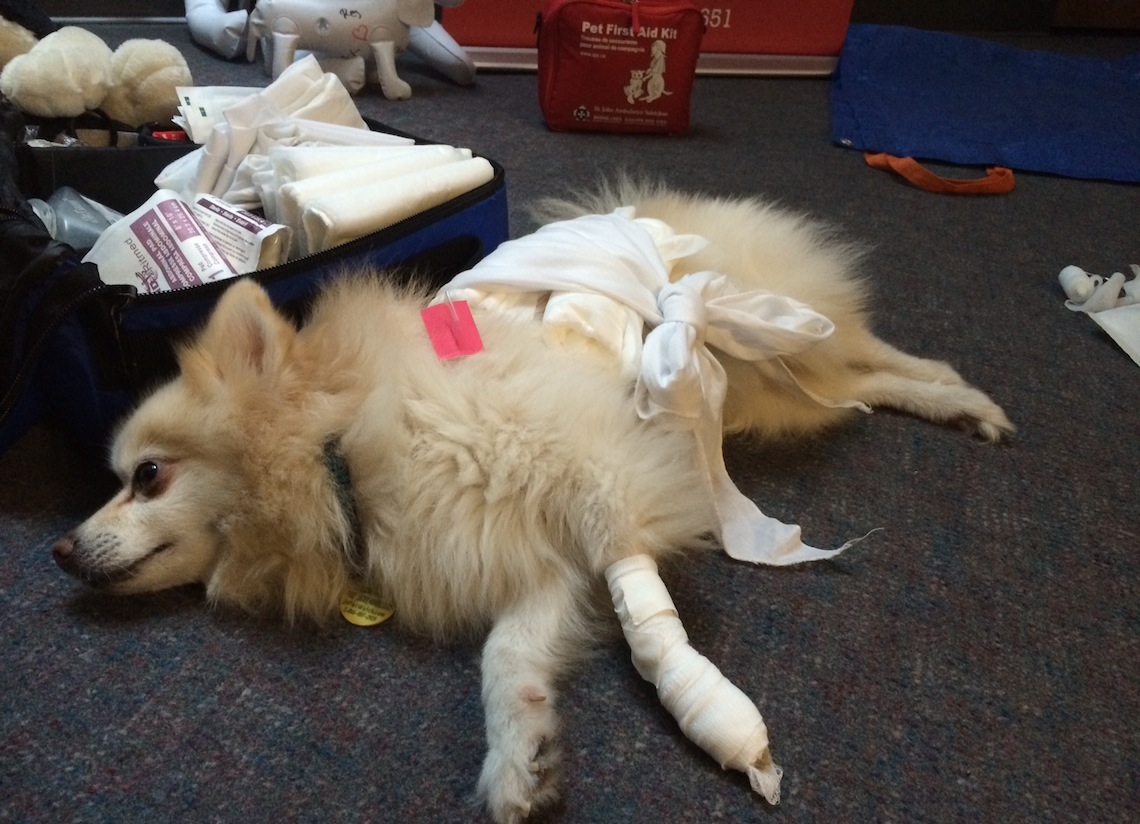 Teddy all wrapped up in bandages – including a “glass shard” on his body.

In this crash course, we also learned how to check a pulse, the basics of CPR on animals and also how to deal with an airway blockage (aka. choking).

Other dog-related programs at St. John Ambulance includes the Therapy Dog program, which consists of trained dogs visiting care homes, senior facilities, hospitals, rehabilitation centres, and more, across the province.  For examples, the Therapy Dogs in the Paws for Stories program visit schools and libraries to help promote reading skills, giving children the opportunity to read to a furry companion in a relaxed environment. 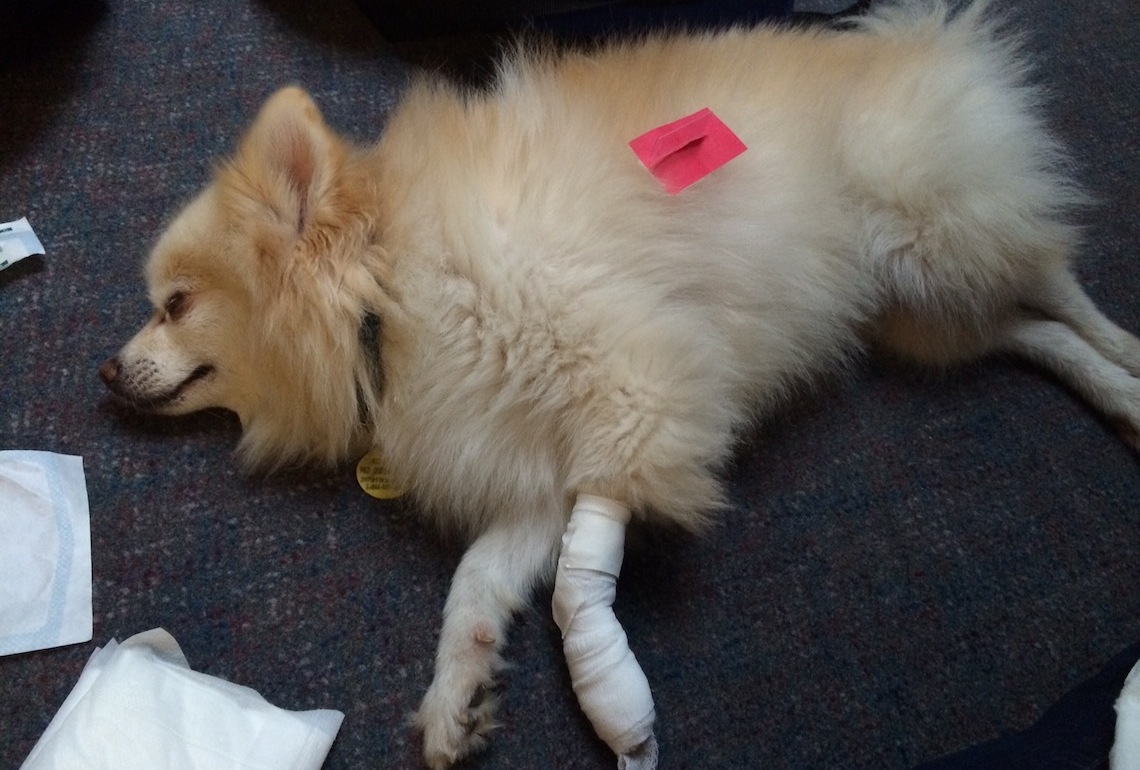 To support programs like these, St. John Ambulance is releasing a limited-edition 2015 calendar featuring their fluffy Therapy Dogs, with proceeds to support the community services of the organization.

To find out more about St. John Ambulance and the programs they offer, including Pet First Aid, visit sja.ca.