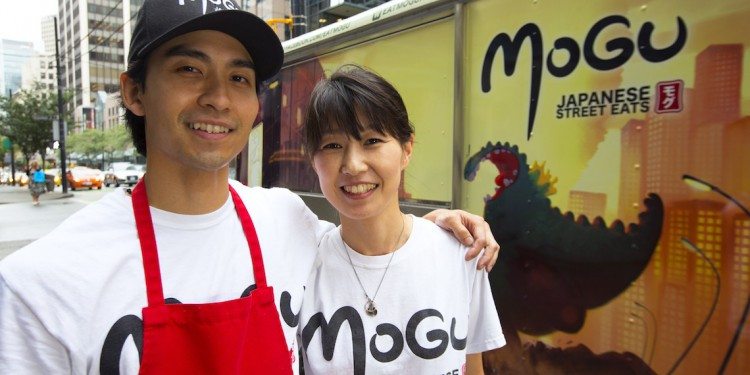 One of our Vancouver food carts is about to reach television-fame through a feature in the highly acclaimed Eat Street series on the Food Network. Produced by Vancouver-based Paperny Entertainment, Eat Street is already on its 5th Season. Each episode features popular food carts around North America, giving viewers a glimpse of food cart culture and the delicious eats that come with it.

Season 5 features a handful of Vancouver food trucks, including Mogu Japanese Street Eats, which is parked from Tuesday to Friday during the downtown Vancouver lunchtime rush on Howe and Dunsmuir.  Modern Mix had a chance to literally step inside the Mogu food cart in downtown Vancouver and meet the husband and wife team Yuji and Kumiko Aoki. The truck itself is pretty much a stainless steel kitchen on wheels; we watched as the duo put together an Ebi Katsu in their small but efficient kitchen.

Placed between a grilled brioche bun, Ebi Katsu is a panko breaded deep fried prawn patty, topped with house made Japanese tartar sauce and lettuce.  Yuji pointed out that his prawn patty is made with whole prawns, so you get that satisfying “pop” when biting into it (like biting into a juicy sausage).  On the side we had two pieces of karaage chicken, dipped with sweet chilli sauce and topped with Japanese green onions.

Having worked in kitchens in Canada and Japan, Yuji’s background has helped him create irresistible Japanese street eats that are quickly becoming a favourite among Vancouver foodies. Mijune from Follow Me Foodie, for example, listed Mogu as having “the best chicken karaage in Vancouver“, while Sean’s Adventures in Flavor Town calls this Japanese fast food truck, “good food fast“.

Other sandwiches include Chicken Teriyaki, Pork Miso Katsu and the vegetarian Kabocha Korokke (sweet Japanese squash croquette).  Mogu Japanese Street Eats can be found from Tuesday to Friday from 11:30am to 2:30pm on the corner of Howe and Dunsmuir.  They will be featured on Season 5 of Eat St. on the Food Network on Saturday, September 13th at 4pm PST. In the meantime, Mogu has shared with us their recipe for the Kabocha Korokke Sandwich which is featured on the Eat St Episode.