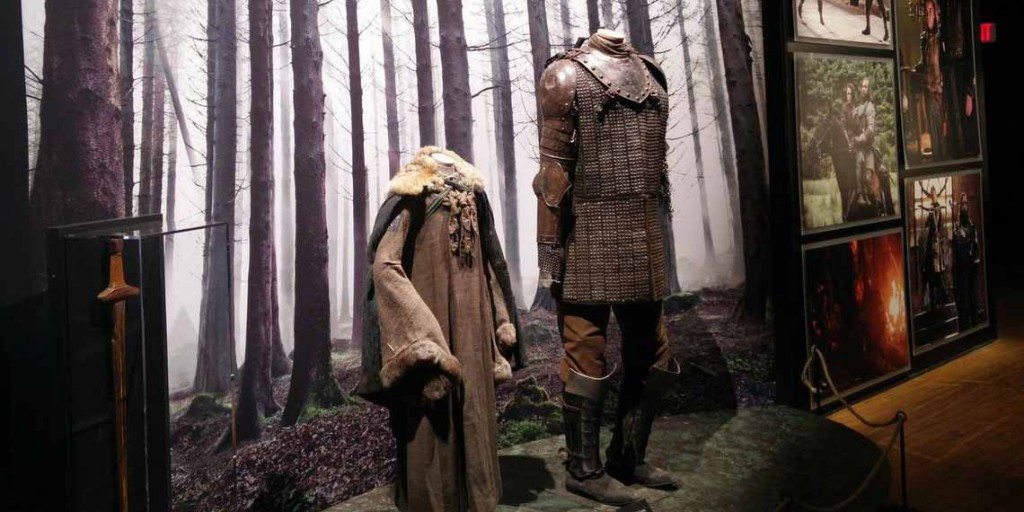 By Lesley Chang, MMV Guest Contributor This year, the Pacific National Exhibition brings us a completely new and unique exhibit. The Game of Thrones exhibit is now open for PNE attendees to see – and feel – the world of Westeros. The exhibition, along with The Fair at the PNE, opens this year on Saturday August 16.  If you are a Game of Thrones fan, this is something you won’t want to miss. Modern Mix Vancouver had a sneak peek of the GoT Exhibit the week before opening – here’s my list of the top five things to look out for:

Have you ever wanted to go up the elevator at Castle Black and see what that experience was like? Well, this impressive and immersive 3D Oculus Rift experience will make you feel every little bit of that ride. I have a slight fear of heights and I was swaying a bit in the small booth. You’re not actually going anywhere but it feels like you are. The booths are outfitted with headphones and the Oculus Rift headset.

2. The Artifacts and Costumes

There are over 100 artifacts and costumes on display at the exhibit. Some of the props aren’t as up to date as they could be, but that’s because the props are actually being used to film season 5. There was one costume from every major character in the show, including two of Danerys’ dresses. There’s also a complete exhibit of the weapons used in seasons 1, 2 and 3, including Ned Stark’s Ice. Sadly, there were no real dragon eggs, but there was a dragon model!

3. The Map of Westeros and Essos

It’s hard to imagine the world of Game of Thrones without a complete map. There are many online, but the world itself is so big and so completely full of lore that it’s easy to get lost in. Either way, the exhibit had a blown up map of the world of Westeros and Essos. Most casual watchers will know that Westeros is where the Starks, the Baratheons, the Lannisters etc. are from, but exploring the world of Essos, where Dany’s currently in, is really interesting. When looking at the map, you get a true sense of just how BIG those land masses are and you get a true appreciation for how long it takes for stories play out.

This is a true to size Iron Throne that’s used in the show. Fans will get a chance to get their photo taken in the Iron Throne, so come prepared with your best pose! Props may be available to attendees if they didn’t bring their own. In fact, if you get a photo taken, share it with us so we can see!

Sibel Kekilli, better known as Shae, has been in town doing several appearances including autographs at Future Shop and various media interviews. But on August 16 at 3pm, she’ll be doing an interview with Love It or List It Vancouver host Todd Talbot on the Chevrolet Performance Stage and she’ll be taking questions from the audience. Do not miss your chance to meet the lovely Shae from Game of Thrones!

Admission to the exhibit is free of charge with your ticket to the Pacific National Exhibition. Tickets can be purchased online by visiting: pne.ca/tickets.html.