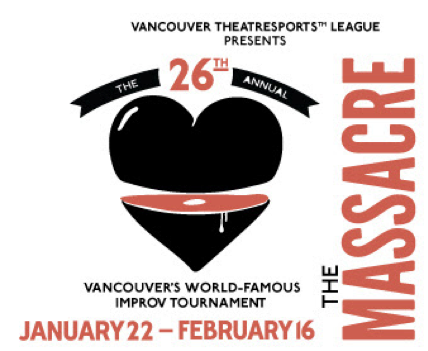 The Vancouver TheatreSports™ League’s signature festival pits exceptional improv groups from around the world against each other in a battle for and inspired by your love. This year is The Massacre’s 26th glorious year and they are aiming for their funniest festival yet.

Early in the tournament Vancouver’s finest improv teams will do bloody, comedic battle in the TheatreSports™ format you know and love. As things heat up and the week of Valentine’s itself approaches, your favourite teams from past years and hot groups new to this year will descend on Vancouver to see who the real TheatreSports™ champions are this year. 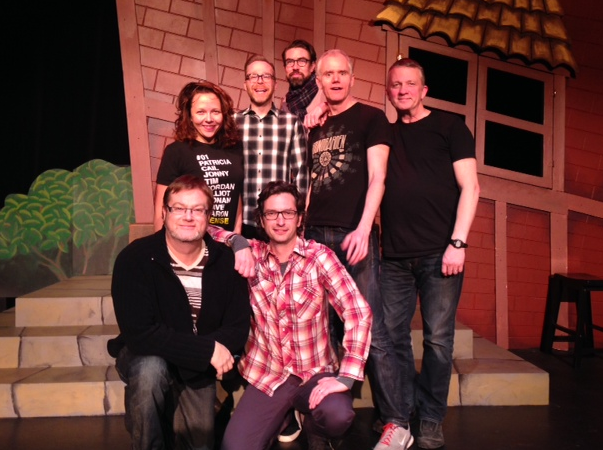 Mom’s New Boyfriend vs. Rock-Tricity in “The Massacre” Improv Tournament

Earlier this week, I watched the competition between two Vancouver teams: “Mom’s New Boyfriend” vs. “Rock-Tricity”.   The neat thing about improv, is that no two shows are the same.  There are different “games” that you watch the teams play against each other, using suggestions from the audience to set the scene.

For example, in one of the “games”, the teams quizzed a married couple in the audience (the wifey half of the duo happened to be a reporter at the event) about how they got hitched.  Using the limited information provided, the improv team got creative and re-inacted the occasion in a hilarious and exaggerated way.

“The Massacre Improv Tournament and Festival offers an opportunity for members of the global improv community to come together in a lively and entertaining format,” says Jay Ono, Executive Director at VTSL. “We are incredibly proud to host the festival and look forward to welcoming both local and international teams to The Improv Centre.”

Aside from Vancouver, this year’s contestants include teams from Austin, Portland, Slovenia, Toronto and returning champions Edmonton. So grab a friend or a significant other and head down to The Improv Centre on Granville Island for the wildest improv tournament Vancouver has ever seen.

Tickets can be purchased online by clicking here.

“The Love Brunch” for the Newly Engaged at Dockside Restaurant (April 4, 2020)