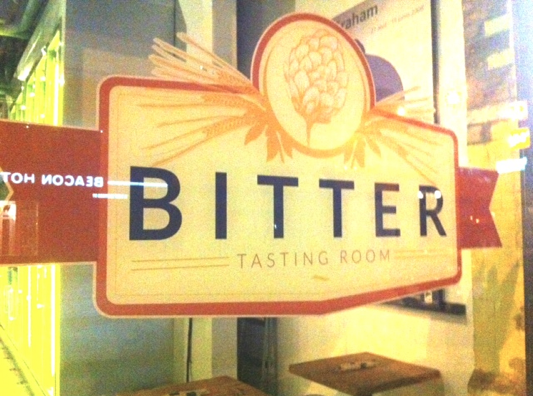 As for eats, the menu is primarily a mix of classic and comfort foods – pretzels and bar nuts, to hearty Southern-style chicken and biscuits with gravy.   There’s a wide variety of German sausages, sausage rolls, and pork crackling, scratchings and rind.  For those not highly fond of meat, the popular hard-boiled eggs – Deviled, Scotched and Pickled eggs – is a must-try with your beer.

Located in a heritage flatiron building, Bitter is uniquely shaped with original tile floors and light fixtures made with keg parts.  The 3/4 circular bar is lined with benches made from wood originating from buildings in Yaletown and Gastown.  In the back one will find a semi-private room with a massive projector screen to watch Canucks games.  Images of historic Vancouver are etched upon the thick glass display windows adding to its Prohibition feel and making it a cozy and unpretentious watering hole.

Find Bitter at 16 West Hastings Street (between Carrall and Abbott) in Gastown.