DJ Tiesto, the #2 DJ in the world (but arguably the best known) is having an in-store performance and autograph session at HMV Robson before his concert on Saturday November 14 from 5pm to 7pm.
Wristband policy in effect on a first come first served basis, and will be handed out at 11:00am that morning.  Autographs are not guaranteed due to time restrictions.

I don’t know if this is such a good idea to jam hundreds and hundreds of Tiesto fans into an HMV store.  If PNE (where Tiesto is playing later that night) can fit 10,000+ concert goers who paid $100+ for their ticket, a free concert at an in-store venue is going to cause massive chaos at HMV…….This reminds me of when Deadmau5 played a free concert at the Santa Monica Apple Store and caused such an overwhelming response that the police had to shut down his show. 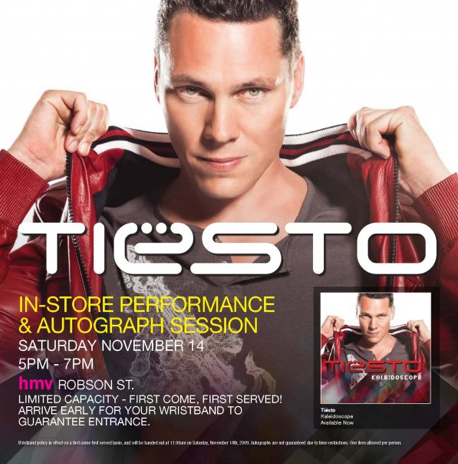 David Guetta – at The Commodore (December 30)