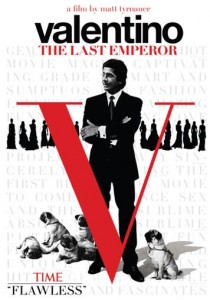 Reviewed by Time Magazine as “flawless”, and “beautiful in every way” by The Globe and Mail, Valentino: The Last Emperor has been premiering at film festivals and special events around the world since last summer.  Last night, I had the opportunity to go to the FASHION Magazine Vancouver pre-screening of Valentino: The Last Emperor, an insightful “behind-the-scenes” documentary filmed by Vanity Fair corresopndent, Matt Rymauer. We are taken through the pre-retirement years of haute-couture designer Valentino and his love of “beautiful things”.

It is a behind-the-scenes look at the world of fashion, featuring unprecedented access to the high temples of Haute Couture. The legendary Valentino is the star of the film, along with his longtime business partner, Giancarlo Giammetti. VALENTINO THE LAST EMPEROR follows them for the final two years of their careers, and shows the struggles the two men face as they confront the final act of a nearly 50-year career at the top of the world’s most glamorous and competitive game. The struggle of art against commerce is at the center of the film. In the end, however, the story proves to be not one about money or expensive clothes, but about love.

Despite capturing the creation of handsewn full length gowns, paraded by elegant models on the runway, and seeing intricate show sets designed and brough to life, the documentary, surprisingly, focuses more on the relationship between Valentino and Giancarlo Giammetti, Valentino’s lover and business partner.  A portrait of a business partnership and a romance.  Despite being in the shadows of another man’s success, Giancarlo Giammetti describes his supporting role of Valentino as “happiness”.  Movie starts also make several cameo appearances in the documentary, including Elton John, Gwyneth Paltrow and Anne Hathaway – see if you can spot them throughout the film!

Valentino: The Last Emperor opens in theatres on Friday, July 10th and will be playing at Tinseltown (88 West Pender Street) in Vancouver.  Fashion fans who are interested in European fashion should definitely watch this documentary – however, be warned  that this movie is not for conventional entertainment; not so much a movie with a plot and climax, but more snapshots and insights into the life of Valentino.  If you don’t know much about the designer, I woudl suggest reading up on him and getting a sense of his fashion taste to more fully appreciate The Last Emperor.