Thank you to Raj of Urban Mixer for this opportunity! 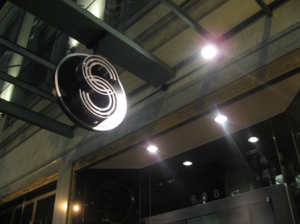 Last night, I had the privilege of attending a wine tasting and gourmet dinner at The Shore Club (688 Dunsmuir Street) with Stuart Bourne of Barossa Valley Estate (BVE) in Australia. After being escorted into the private “Granville Room” of The Shore Club, I was given a quick debrief on what to expect for the evening. Stuart Bourne is an Australian winemaker who has taken a trip out to Canada with the intention of meeting, networking, conversing, educating, chatting, dining and, of course, wining with various industry professionals promoting the Barossa Valley Estate label.

Despite my unfamiliarity with the wine industry, dinner with Stuart in an informal, small-group setting, made the global wine industry a bit more “real” to me. Stuart has a knack for taking industry terminology and conversing in a method that makes sense to the average person unfamiliar with the wine industry. For example, comparing different qualities of wines to the BMW 3-, 5-, and 7- Series made the wine-tasting experience a bit more comparable. For the two ladies at the table (myself included), we were given a different analogy with Jimmy Choo’s and Manolo Blahnik’s!

We sampled four bottles of red wine; one Cabernet Sauvignon and three Shirazes:

For those of you who don’t know, the wines are named after the grapes (ie. Cabernet Grape, Shiraz Grape) which produced it. Although the suggested retail value for the wines ranged from $16.50 to $100 for the Black Pepper Shiraz, price does not necessarily accurately reflect or distinguish a good wine from a great wine. Everyone has their own tastes and preferences and some of the most expensive wines never get tasted because they become icons of status and prestige, to be auctioned off or kept in a cellar for bragging rights.

When we started talking about the ecologically sustainable practices of Barossa Valley Estate, three interesting points Stuart mentioned stood out to me: 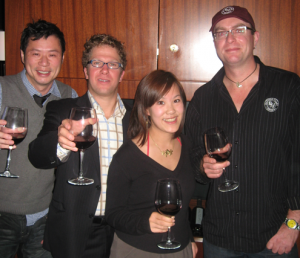 When the delicious food came, I learned that the taste of wine should only ever be secondary to the food. Stuart then visually demonstrated this by emphasizing how his plate is directly in front of the diner, with the wine to the right. He would find it absolutely absurd if the wine was in the center with his plate of food on the side.

After a jovial meal of steak and seafood, and the international reaches of Barossa Valley Estate, I realized that probably someone else in in Vancouver is also opening a bottle of wine from BVE. Nonetheless, despite living on the other side of the world from the wine maker, they can be assured that the contents inside that bottle were carefully crafted and made with quality and richness and in the care of Stuart Bourne.