With media passes from Warner Brothers, Michael Mak had the privilege of attending the Imax prescreening of “Batman: The Dark Knight” in Hong Kong before the official opening in North America on Friday July 18, 2008. 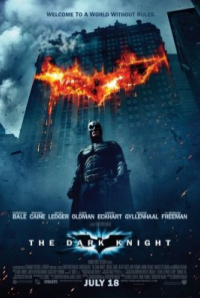 First things first: a little bit about me. I love computer games, I love comic books, I love manga and anime. I play magic cards and I paint little soldier miniatures. In other words, I am a huge geek. That being said, you may view this review as a fanboy’s tribute to one of his favourite icons. However, a good movie is a good movie, and “Batman: The Dark Knight” makes the cut.

The plot of the second movie picks up shortly after where “Batman Begins” left off. Gotham has a new hero (or anti-hero, as some may call it) and the oppressed citizens are starting to fight back against the corruption and decay that has long gripped the city. However, there is always a balance to things, and Christian Bale’s ginormous biceps tipped the scale. This is where The Joker comes in. Fantastically played by the late Heath Ledger, this classic comic book villian is transformed into a character diabolical in vision, psychotic in action, and even skirting the bounds of genius in execution. This guy is the epitome of evil. He inspires tyranny for the sake of tyranny. He makes Superman’s Lex Luthor or Spiderman’s Harry Osborn (hmmmm strawberries) look like members of the power rangers. From the way The Joker talks, moves, and spreads fear, every last action is embedded with the touch of a madman. This is Heath Ledger at his best and unfortunately, last.

The other new entry into the second installment is district attorney Harvey Dent (played by Aaron Eckhart). If you’re a geek like me, you’ll know which significant Batman character this guy is. For the uneducated (but more socially active), this guy is Gotham City’s new ‘white knight,’ the hero to Bruce Wayne’s more anti-hero persona. Whereas Batman fights crime in the streets with high tech gadgets and smooth kung fu, good ol’ Harvey takes the battle to the courtrooms with indictments and sentences, putting away criminals with the power of the law. As you would expect, this guy isnt exactly on the best terms with the mob and his actions will eventually catch up with him. His joyful optimistic demeanor is a great contrast to batman’s brooding loner-type personality.

Throughout the movie, we see these three forces interact and overlap with each other, both physically and psychologically. Between Batman, Harvey, and The Joker, each face their own demons and must come to terms with their actions. What should take precedence? Justice, or revenge? Nobody is guilt-free and their decisions lead to ramifications from which they will never recover from. The story is more complex than “good vs. evil”. Perhaps it is closer to “evil vs. evil” and the actors give an amazing effort in portraying a realistic look in to the human psyche.

If you were sitting on the fence about this movie, or if this movie is out of your typical genre, I would highly recommend that you give this one a chance. Lots of fights, explosions and car chases! And I would say that it’s in the running for one of Ledger’s best works. I suspect that Ledger will get a nomination for this year’s Oscars. The soundtrack is excellent, the picture quality is superb and the camera work is fantastic. This might be biased as I did get to watch it on iMax, but I am sure you normal folk will get a similar experience. Enjoy!