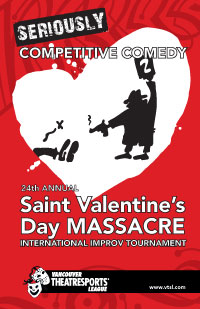 Whether you’re nursing a broken heart or fanning the flames of newfound love, the St. Valentine’s Day Massacre is the perfect Valentine’s night out!

Vancouver TheatreSports League hosts the 24th annual St. Valentine’s Day Massacre – an international improv tournament of epic proportions. Hosting teams from as far away as Paris, this promises to be the best St. Val Massacre yet. Hold onto your seat as teams compete head-to-head! Come and experience styles of improv from across the globe.

Vancouver TheatreSports League is improv comedy – everything you see onstage is made up on the spot. It’s an interactive entertainment experience as the players ask for audience suggestions to create their scenes.  They’ll usually invite an audience member up onstage.

St. Valentine’s Day Massacre pits world-class improv teams from across the continent and around the world against each other – resulting in some of the craziest, most hilarious improvised comedy ever seen!  Follow your favourite team as they duel their way to the final match. Joining the winners of the Vancouver competition are visiting teams from Austin,Bellingham,Chicago, Seattle, and Paris, France. Then, come and see them compete to be the last team standing in the Final Massacre!

Tickets are as affordable as $8.75 for students and $11.75 for adults.  For show times, information and ticket sales see www.vtsl.com

MMV Giveaway:  Modern Mix Vancouver is giving away two pairs of tickets to the performance of St. Valentine’s Day Massacre.  Leave a comment below telling us who you’d bring with you to the improv show and a random winner will be chosen from the comments below.  Be sure to leave your email address so we can contact you if you’re a winner.  Contests ends Saturday January 28th (11:59pm PST).  Open to BC address only (how are you going to make it to the show if you’re from out of town?).