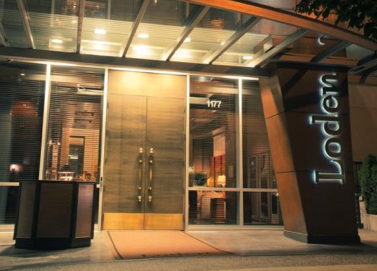 It is officially safe to say 2012 is in full gear, and with the next long weekend a long trek away, a downtown Vancouver staycation may be the perfect remedy for a mini but sure needed break. When trying to choose a boutique hotel, if you’re anything like me, you sometimes want all the typical hotel bells and whistles but not have the 5-star rates, correct? If you want a one-of-a-kind boutique hotel experience that still includes a complete list of amenities and friendly concierge team, the Loden Hotel gives you just that, and is right smack in the middle of the best that downtown Vancouver has to offer. Plus, being in Coal Harbour, the views, atmosphere and proximity to Stanley Park gives this hotel a location advantage.

Upon entering the lobby of the Loden, there is the instant feeling of opulence with the very retro-mod inspired décor. While taking a tour with the Director of Sales, Richard Graham, he mentions that the guests of the hotel are “trendy, design centric individuals,” and I immediately see why. It’s cool yet mature and refined. From the colour-rich artwork to the floor-to-ceiling striped marble fireplace, and learning that A-list celebrities are known to frequently stay at Loden, I wouldn’t mind lounging here all afternoon long and perhaps capture a star-sighting too.

Once we make our way to view the rooms, I can’t help but think, ‘gosh, no wonder celebrities like coming here!’ The guest rooms offer a stunning first impression; soft hues with nature-inspired contrasts, oh-so-comfortable beds, über-luxurious bathrooms, technology plugins and best of all, rooms so quiet that you’ll forget you’re in the middle of the city’s hustle and bustle or that there are rooms right next door.

Then it’s time to see what else a stay includes and I discover that the Loden has it all. The BeFit Studio fitness centre is complete with on-site personal training options, the spa room can be booked for solo or couple services, the business centre is small yet private to get work done if needed and the top amenity is the French bistro, Tableau Bar and Bistro located off the lobby. 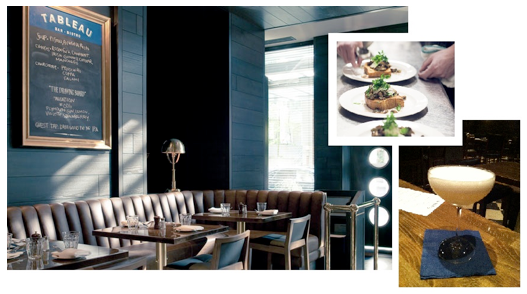 Tableau, voted Best in the City by Georgia Straight in 2011, is such a nice recent addition to Loden. Richard mentioned that the menu that has been brilliantly crafted by Executive Chef Marc-André Choquette, was inspired greatly by New York and Paris culinary scenes to offer a unique option to our very high caliber Vancouver restaurants’ list. What really stood out to me was the growing popularity of brunch at Tabeau. In a city that needs more options for winding down on Saturdays and spending time with your loved ones on Sundays, we all can really use a weekend brunch tradition. Tableau is becoming the choice for locals and hotel guests, and quite simply, must really be experienced.

So my verdict? A Loden weekend staycation (especially with Valentine’s Day coming up!) and brunch at Tableau are really going to be hard to resist doing over and over again.

MMV Giveaway: Modern Mix Vancouver is giving away a $70 gift certificate for brunch at Tableau Bar & Bistro. Leave a comment below telling us your favourite brunch item on the Tableau brunch menu (click here to see the menu) and a random winner will be chosen from the comments below. Be sure to leave your email address so we can contact you if you’re a winner. Contests ends Tuesday January 31st (11:59pm PST).

LASTLY, want to try out the award winning Loden Hotel for yourself? Contact Director of Sales, Richard Graham at Richard.Graham@theLoden.com and mention Modern Mix Vancouver or this article to receive a special 15% off* the Best Available Rate of the day!

*This MMV offer is valid until February 29, 2012, subject to availability, is based on double occupancy, cannot be combined with any other promotion and is not valid on February 14, 2012.