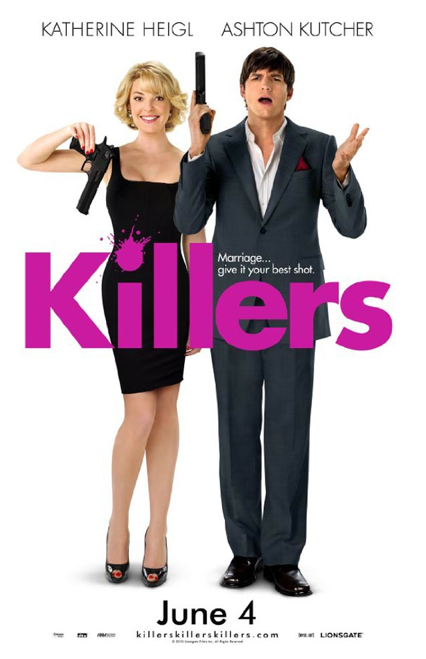 I went to the prescreening of Killers at the Scotiabank Theatre the night before the movie’s premier on Friday June 4, 2010.  Don’t be fooled by the violent title – with stars like Ashton Kutcher and Katherine Heigl, the feel of the movie reminded me of Mr. and Mrs. Smith crossed with the suburban feel of Desperate Housewives.

Spencer Aimes (Kutcher) is an undercover, government-hired assassin on assignment in Nice, France but upon meeting the awkward (but pretty) Jen Kornfeldt (Heigl), he completes his last mission and leaves his questionable lifestyle behind for the American suburban lifestyle.  Three years into a happy marriage, Spencer’s past catches up with him and the next three-quarters of the movie is filled with fighting hired killers and running for their lives as Spencer discovers he has a 20 million dollar ransom on his head.  Of course, Jen knows nothing about Spencer’s past and there are several comically exaggerated occasions with her shocked reactions – guns hidden in the seat, fake passports in the ceiling, a disgruntled housewife with having to steal another car.  It’s a wonder Spencer is not more stressed out and cranky – while dodging bullets, and attempting to keep up neighbourly niceties, Spencer and Jen work on their marriage, the outrageous balance of all these elements provide a couple of humorous moments throughout the movies.

IMDB categories this movie as action, comedy, romance and thriller; Killers a well-rounded, brainless movie thats perfect for a couple of laughs or a night of lighthearted humour after a long week.